The Bank of Canada just cut rates by 50bps…How could this impact you?

The Bank of Canada cut its target interest rate by 50bps (0.50%) today.  The BIG question is will the banks follow with a similar reduction in their Prime lending rate?  If so, it could provide some immediate relief for those with lines of credit or variable rate mortgages.

From a fixed mortgage rate perspective, the markets were anticipating a reduction, however, the size of the reduction caught most people off guard.  5yr fixed bond yields, which drive 5year fixed mortgage rates, dropped 15bps (0.15%) on March 2nd after the US announced their emergency rate cut, and at the time writing this article (11am), yields have dropped another 10bps (0.10%) today.  What does this mean to you?  5 year fixed mortgage rates are almost surely headed downward, the question is when? Lenders typically wait until the spring real estate market to put their best rates forward, but we may be off to an early start….

For the official press release on why the Bank of Canada lowered its rate visit https://www.bankofcanada.ca/2020/03/fad-press-release-2020-03-04/, or give us a call or send us an email at any time as we are happy to discuss how this could impact your mortgage options. 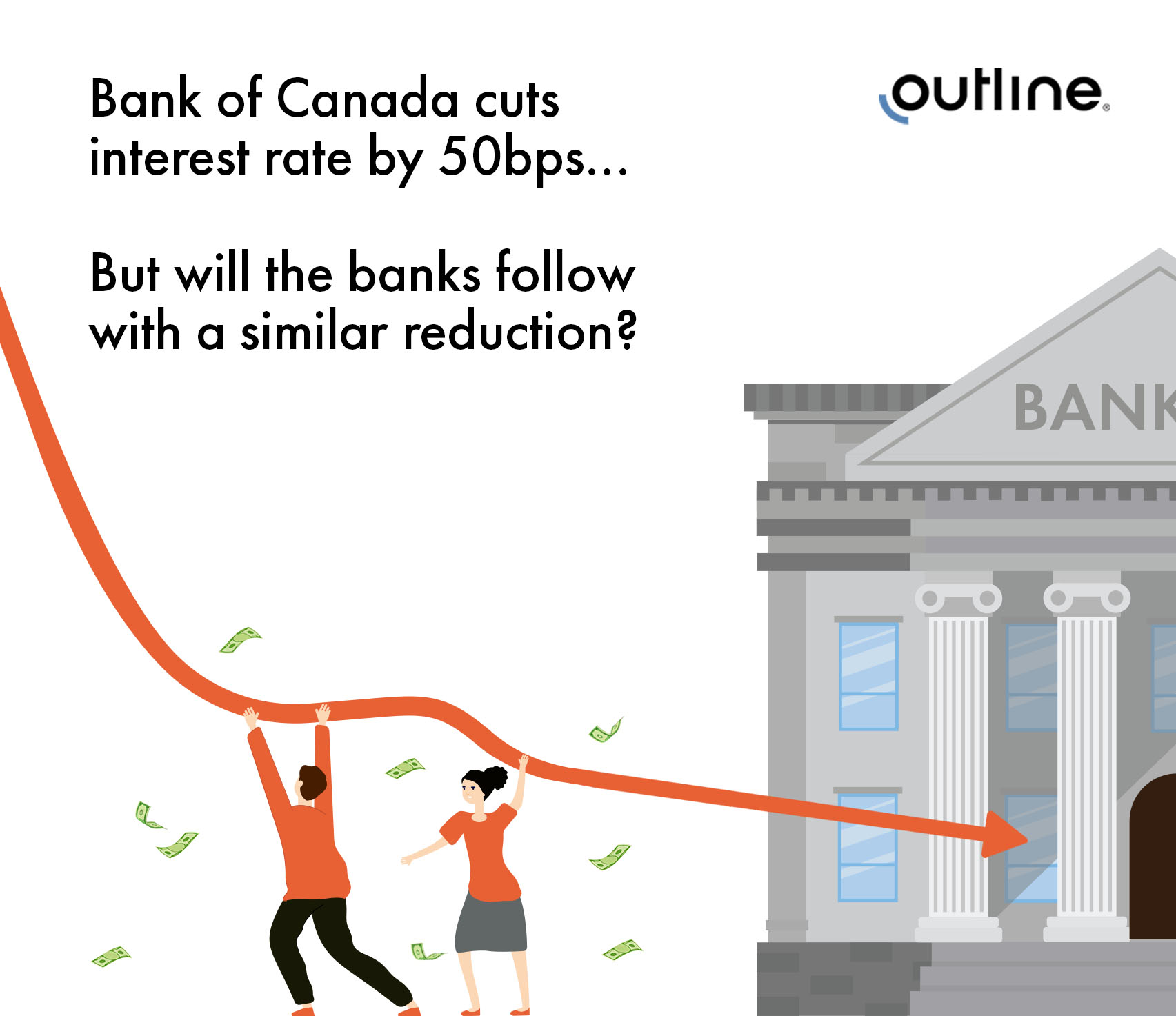 The Bank of Canada today lowered its target for the overnight rate by 50 basis points to 1 ¼ percent. The Bank Rate is correspondingly 1 ½ percent and the deposit rate is 1 percent.

While Canada’s economy has been operating close to potential with inflation on target, the COVID-19 virus is a material negative shock to the Canadian and global outlooks, and monetary and fiscal authorities are responding.

Before the outbreak, the global economy was showing signs of stabilizing, as the Bank had projected in its January Monetary Policy Report (MPR). However, COVID-19 represents a significant health threat to people in a growing number of countries. In consequence, business activity in some regions has fallen sharply and supply chains have been disrupted. This has pulled down commodity prices and the Canadian dollar has depreciated. Global markets are reacting to the spread of the virus by repricing risk across a broad set of assets, making financial conditions less accommodative. It is likely that as the virus spreads, business and consumer confidence will deteriorate, further depressing activity.

In Canada, GDP growth slowed to 0.3 percent during the fourth quarter of 2019, in line with the Bank’s forecast, although its composition was different. Consumption was stronger than expected, supported by healthy labour income growth. Residential investment continued to grow, albeit at a more moderate pace than earlier in the year. Meanwhile, both business investment and exports weakened.

It is becoming clear that the first quarter of 2020 will be weaker than the Bank had expected. The drop in Canada’s terms of trade, if sustained, will weigh on income growth. Meanwhile, business investment does not appear to be recovering as was expected following positive trade policy developments. In addition, rail line blockades, strikes by Ontario teachers, and winter storms in some regions are dampening economic activity in the first quarter.

CPI inflation in January was stronger than expected, due to temporary factors. Core measures of inflation all remain around 2 percent, consistent with an economy that has been operating close to potential.

In light of all these developments, the outlook is clearly weaker now than it was in January. As the situation evolves, Governing Council stands ready to adjust monetary policy further if required to support economic growth and keep inflation on target. While markets continue to function well, the Bank will continue to ensure that the Canadian financial system has sufficient liquidity.

The Bank continues to closely monitor economic and financial conditions, in coordination with other G7 central banks and fiscal authorities.

The next scheduled date for announcing the overnight rate target is April 15, 2020. The next full update of the Bank’s outlook for the economy and inflation, including risks to the projection, will be published in the MPR at the same time.”

Stress Test on the Move…Facts vs Fiction