Which Province Has the Largest Structural Housing Deficit?

“Ontario would require over 650,000 homes for its ratio of dwellings to population to equal that in the rest of the country.”

With Canada’s population growing at by far the fastest rate of any G7 country, a wave of recent reports have been released which analyze the housing stock vs. population dynamic.

While we’ve touched on this topic in previous Monthly Outline’s, a great new study released by Scotiabank on January 12, 2022 concluded the following:

– “Canada’s population-adjusted housing stock is the lowest in the G7.”

– “Outcomes vary by province in Canada, with Alberta, Manitoba and Ontario recording the lowest number of homes per capita relative to other provinces.”

– “Ontario would require over 650,000 homes for its ratio of dwellings to population to equal that in the rest of the country.”

– “As we look to the future, we remain of the view that the chronic shortage of housing relative to the population’s needs will put upward pressure on prices and reduce affordability”. 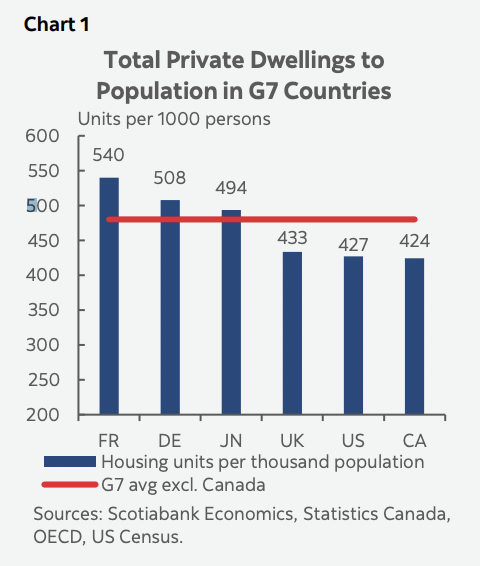 To read the full study along with some very informative infographics, please click here.

Market Outlook: Headwinds or Tailwinds in Our Future?