Bond Yields have spiked upward – what does this mean for current and future mortgage rates?

As illustrated in the above chart, the Government of Canada 5-Year Bond Yields increased by 45 basis points (0.45%) from September 14th through October 15th (at time of writing).

Why does this matter?  5-year fixed mortgage rates typically follow the 5-year Bond Yields which is the market’s view/prediction of where the Bank of Canada key interest rate will be in the future.  Given how fast bond yields have increased, not all lenders have passed along the full extent of this increase to their 5-year fixed rates….yet.  If yields remain elevated, expect this gap among lenders to be very short lived.

Where do things go from here?  While we are likely to see 5-year fixed mortgage rates “catch up” to the increase in bond yields, we expect any further increases to be minimal over the medium term.  Why?  So far, the increase in bond yields is based on the general outlook that the economy is recovering, inflation is rising, and the US & Canada are ready to start tapering (removing) their massive bond purchases which was providing unprecedented support to financial markets and the economy.  Will all this ultimately lead to the Bank of Canada increasing their interest rates in 2022?  Maybe — but there are potential headwinds on the horizon:

While the above commentary is based on our observations, all eyes will be on the upcoming October 27th rate update from the Bank of Canada.

As illustrated by the below chart, variable rates are currently priced around Prime -1.00% (or better in many cases).  This represents an extremely good discount to Prime when viewed on a historical basis.  If you or your client are considering fixed vs. variable, please contact a member of the Outline team to receive a customized analysis comparing the potential interest cost/savings of each option. 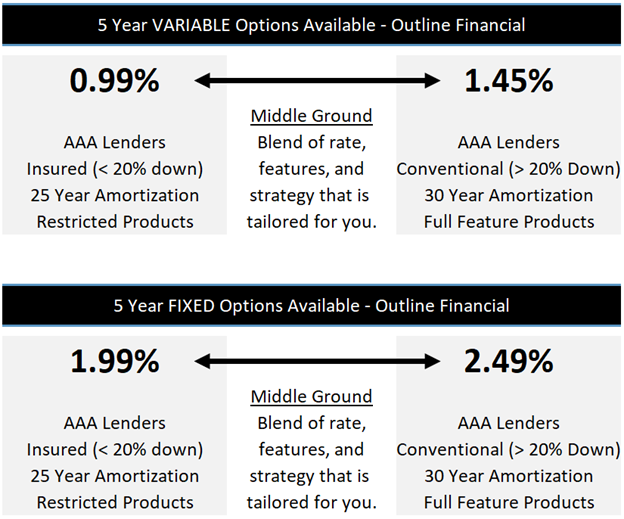 The Bank of Canada Held the Target Overnight Rate of 0.25%