Canadian Economy at a Glance

As we enter the fourth and final quarter of 2021, a number of challenges, including labour issues, will limit growth in Canada. The economy is expected to continue to grow, but the gains will be more moderate than what had been anticipated at the beginning of the year.

A difficult start to the third quarter

Economic activity stumbled in July, as GDP fell 0.1%, following a 0.6% increase in June. However, preliminary analysis from Statistics Canada indicates that growth resumed as the summer wore on.

StatsCan currently estimates that GDP grew by 0.7% in August. The economy would thus have been running at 98.8% of its pre-pandemic pace.

The good news is that the July decline turned out to be less severe than expected. 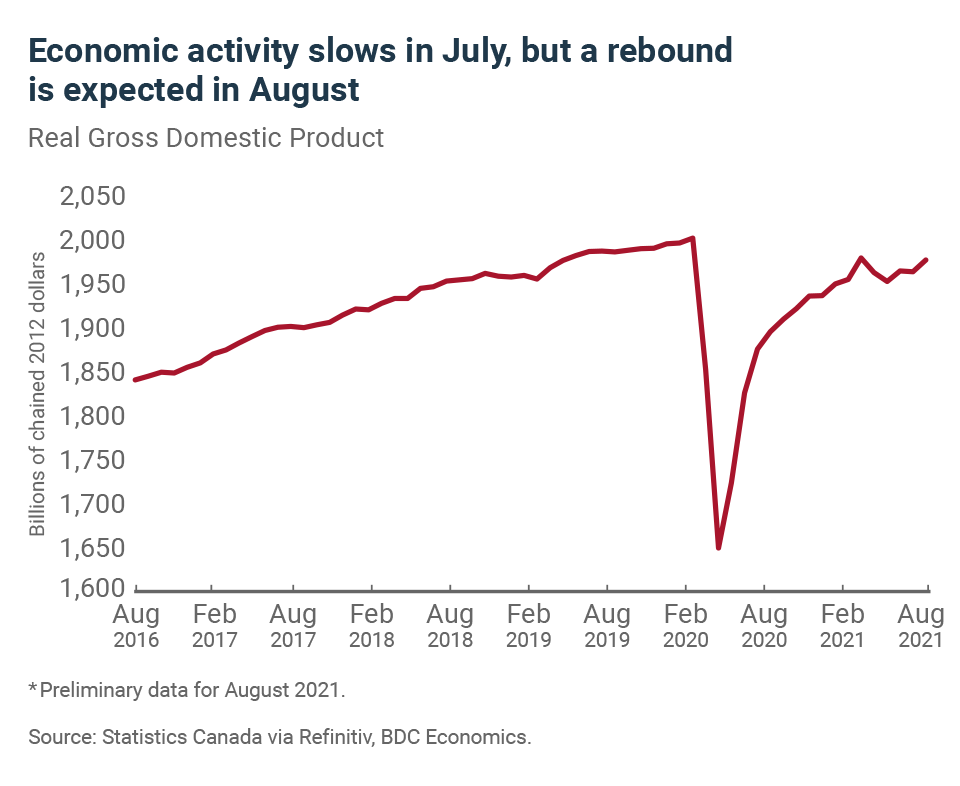 The accommodation and food services sector was particularly strong, growing by 12.5% as restaurants and bars continued to reopen across the country. The story was similar for the arts, entertainment and recreation sectors, where activity rose 8.1%, the highest monthly growth for the sector in a year.

However, the rebound in these industries was not enough to offset challenges faced by other major sectors of the economy.

Three major sectors that are now struggling to grow

The real estate sector accounts for 13% of Canadian gross domestic product. The sector recovered quickly from the crisis, regaining its pre-pandemic level of activity by July 2020 after having lost only 5% at the height of the crisis.

Activity in the resale housing market produced a strong recovery in early 2021, but the supply of homes for sale has been drying up a little more each month. 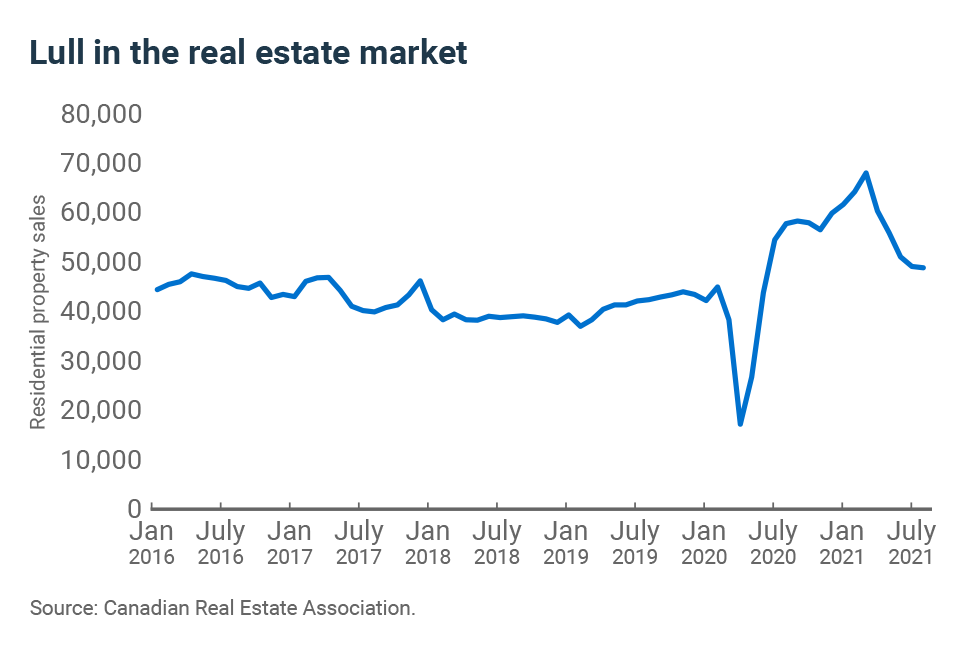 After three consecutive months of losses, growth was again anemic for the sector in July. With home sales declining further in August, the prospects for future gains are dim.

Elsewhere, the trade sector (retail and wholesale) accounts for 10% of the Canadian economy. The industry recovered from a 26% loss in activity between April and September 2020 and proved resilient in the face of the second and third COVID waves.

However, this summer’s reopenings allowed many Canadians to travel and reduced their spending on home renovation projects. Thus, the demand for building materials decreased and with it the price of lumber. This is reflected in sales of lumber by wholesalers (-12.4%) and retailers (-7.3%) in July. 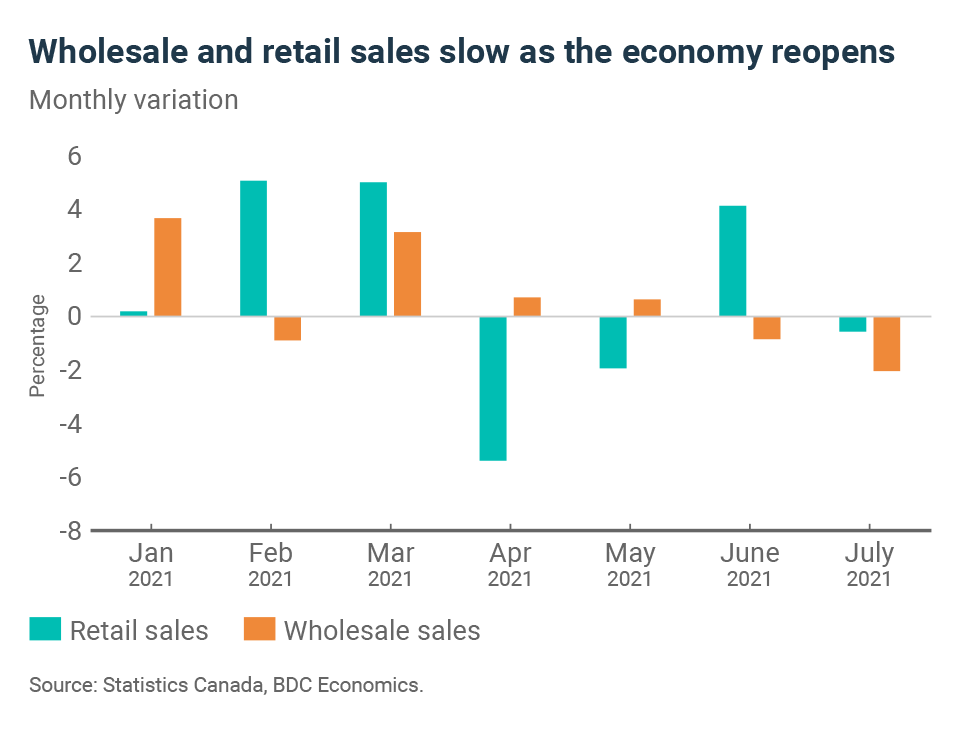 Canadian manufacturing is another big contributor to GDP, accounting for 10% of output. Here, volatility and the adverse effects of the pandemic continue to affect the sector’s outlook.

While auto production rebounded in July from June as a result of plant reopenings, the forestry industry and sawmills are now struggling. 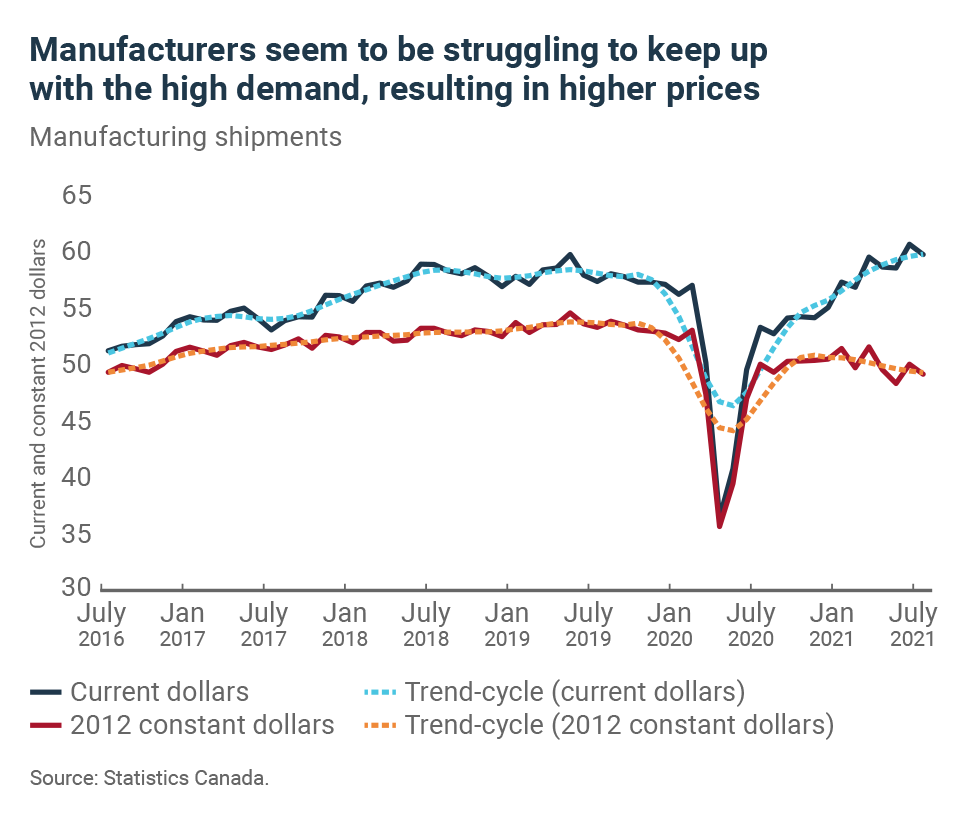 A domino effect of made in China

An energy crisis is currently raging in Asia, particularly in China where energy is becoming increasingly scarce. Factories are being forced to close in order to conserve energy in certain provinces of the country. China is one of the most important suppliers of intermediate goods to Canada and the slowdown in Chinese manufacturing could have a negative impact on Canada.

The closure of Chinese factories and ports to curb the further spread of COVID-19 in the country was already an issue for the global economy. Now that factories are temporarily shutting down to meet regional energy needs, it’s likely supply problems will increase during the rest of the year. New shortages could emerge and increase inflationary pressures.

Employment gains will be hard to come by

In September, the economy added 157,000 jobs and the unemployment rate fell from 7.1 percent to 6.9 percent. This means that employment has fully recovered to its pre-crisis level. However, considering the increase in population, the employment rate is still below what it was in February 2020.

Labour shortages are intensifying in many provinces and industries. As a result, employment gains will prove increasingly difficult to achieve. 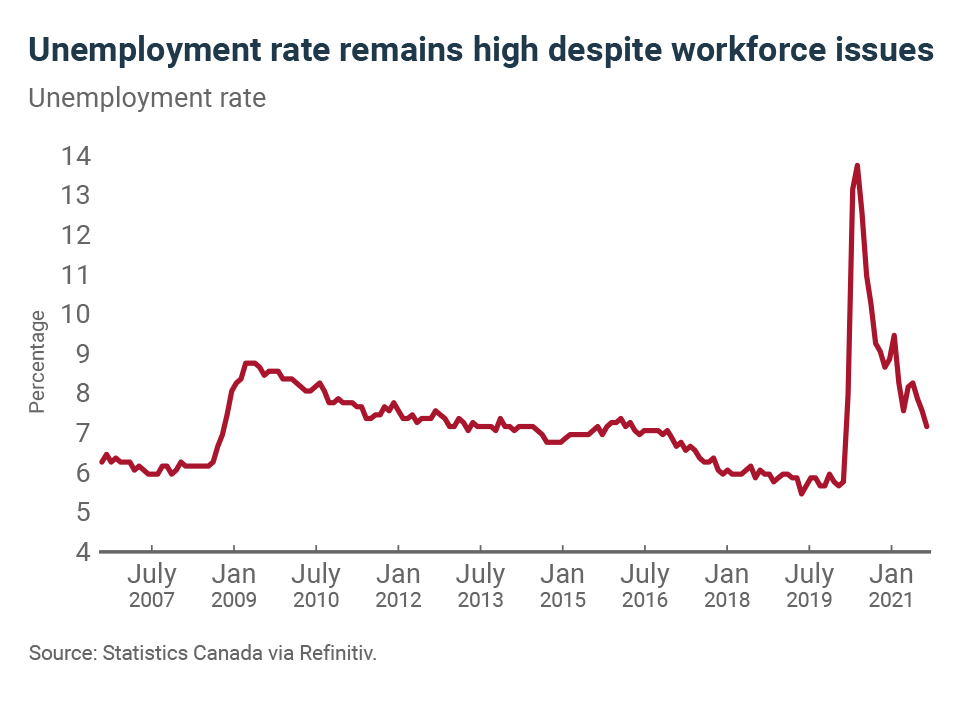 The impact on your business

– The full reopening of the Canadian economy (with a few exceptions) is creating a new dynamic. The restaurant and hospitality sectors are getting busier, while other industries, which were doing well at the beginning of the recovery, are now slowing down. It’s the swing of the pendulum and a step closer to a new reality for the Canadian economy.

– Supply difficulties are putting pressure on production costs and manufacturers are unable to keep up with demand. China’s energy crisis could exacerbate supply problems. If you are dealing with China, try to place your orders early in anticipation of long lead times.

– Labour issues remain the No. 1 challenge for Canadian companies and will continue to be for a long time. Learn how to deal with them in the latest BDC study on labour shortages.